Tom de Brouwer will happily answer all your questions.

In a series of blog posts we will focus on some of the best practices we use within Merapar to evolve our DevOps practices we have built around the AWS platform. Why? Because we think it’s fun to share knowledge and to learn from others in the industry.

To practice continuous integration and continuous deployment, we use multiple environments to manage our development, testing, acceptance and production (DTAP like) workload. To apply the pattern of least privilege, while not limiting the access on our development account, we often use a multi AWS account strategy for each of the different DTAP environments.

When using Jenkins to deploy the workloads, you want to avoid the need to maintain a Jenkins instance per DTAP environment because of the maintenance overhead and the possible differences between the instances.

To avoid this we are using an AWS ECS Cluster to host the build agents, where each ECS task can access one of the DTAP environments. In combination with node based security in Jenkins, we can:

An overview of this solution is depicted below: 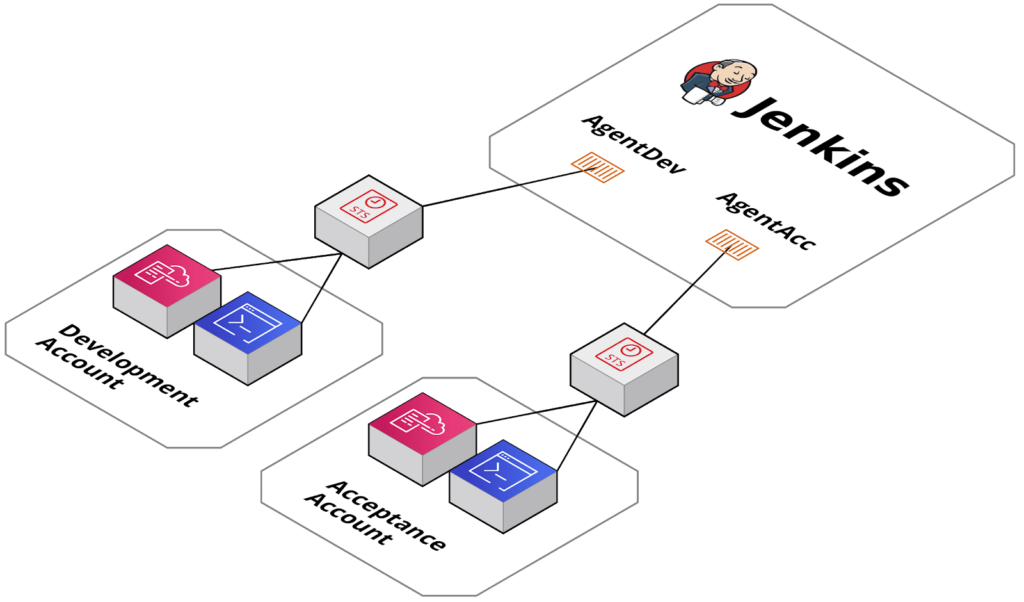 As a basis for this solution the ECS Cluster plugin is used, read more about it in this blog.

Zooming into what exactly is involved when we start a build with above mentioned principles:

In the target account(s) we are required to set up an IAM role which can be used to be assumed by the Jenkins agents to deploy resources. In this example we allow you to deploy all resources. Best practice should be to limit this policy to the required resources and regions.

CloudFormation definition of the role in the target account

In the Jenkins account we need multiple resources to set up the agent. See the following CloudFormation file:

In this configuration we setup:

Note that we back the AWS ECS cluster with AWS EC2 instances to allow for docker builds by sharing the docker.sock. This avoids complicating things we left out of the example.

We can now configure this agent in our Jenkins instance. To do this you first have to add the ECS cluster as a Cloud:

As second step you can add the ECS task as an agent:

Within a Jenkins pipeline we can now use this new Jenkins agent using the agent directive in the groovy scripts:

Once the agent is started we will need to make sure that our agent assumes the role and uses those credentials to execute all commands. We have found that in general, all tools support the usage of AWS_SECRET_ACCESS_KEY, AWS_ACCESS_KEY_ID and AWS_SESSION_TOKEN. Therefore we normally execute the following command at the start of a pipeline:

Note that the withAWS plugin cannot be used in this setup, see this explanation.